The direct line adverts with those ridiculous girl and guy who are obnoxious and come off as ignorant, I don’t know about anyone else but they don’t make me want to buy my insurance from them. Insurance is hard to understand, but the two characters used in it make it seem like everyone who is buying insurance, actually I don’t know what it makes people seem like but god they get on my nerves. “I’m a body language expert” 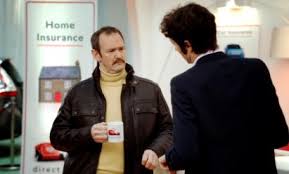 what? This has nothing to do with insurance, never mind about people being suspicious of good deals, this i understand. But when advertising a complicated subject, why make the adverts hard to understand too? “shark attack” whaaaaat?! This woman sounds so stupid, “it has to be north facing or I don’t understand” how has having the “feng shui” or whatever the right way got to do with insurance?

For a M&C Saatchi advert it fails to me, it make me want to run the opposite way. I honestly quite liked the red phone adverts that they used to have. These are meant to be “comedy” adverts. But i have never laughed at one of these, it makes me want to switch the channel over, and even the offer of the no claims deal they have isn’t enough to make me want to try them – though I did last year and I was quoted a very high sum so I obviously didn’t go with them.

Kerry Chilvers, marketing director at Direct Line, said: “Our new creative gives Direct Line a human face after featuring our animated characters over the past couple of years.

Above taken from Marketing magazine (January 2011) I honestly prefer the animated face to the company.

Anyway. I find these as annoying as the “you buy one you get one free!!!” window sales man adverts for a company I cannot even remember the name of except that it possibly has red and yellow colours as a lot of the cheap companies have.

Update: For all those who seem to be searching who it is in the adverts, the bloke who “works” for Direct Line is Chris Addison, the annoying bloke is Alexander Armstrong and the woman is Amelia Bullmore.

One thought on “Direct Line Adverts”

Tell me what you think Cancel reply