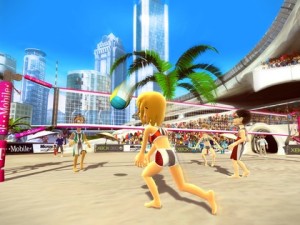 sensor tracks your body, making you the controller instead of having to hold onto a controller like when playing the Nintendo Wii or Sony’s PlayStation Move. There are a large range of games available for the Kinect, including ‘Joy Ride’, a car racing game, ‘Dance Central’, a dancing game and ‘Kinect Sports’, enabling the player to play different sports like bowling and table tennis. The advertising potential for Kinect is great; with only being released since the beginning of November 2010 it already has companies advertising in its games. Chevrolet bought into ‘Joy Ride’, allowing players to virtually test drive Chevrolets vehicles, also watching video advertisements from the company unlocks new Chevrolet vehicles to drive in the game. T-Mobile are another company who have sponsored in game advertising with ‘Kinect Sports’, including branded sports equipment and large foam fingers held by the audience. There is a large potential for in game advertising, and it is appealing to companies because of the interactive feature of it.
It is the opinion of the author that as this technology is progressed further and falls in price; it could be used in out of home advertisements on the street or in shops, whether to play games, or to take over augmented reality in things like the Cisco interactive mirror.

In addition Posterscope published a discussion on their Facebook page saying:

Microsoft Kinect technology is open source which means all the brilliant hackers out there can take it and make it even more valuable to us in the Out of Home Advertising World. This can offer a new and exciting level of interactivity in OOH advertising. Check out what Sensecast is doing with it…interactive OOH news on digital screens that allows viewers to page through the content, to me, this is only the beginning…

The next post will be my conclusion of my dissertation

UPDATE: Check out The Kinect Effect and what people are using the Kinect for, with Microsoft’s permission: Click Here

Tell me what you think Cancel reply